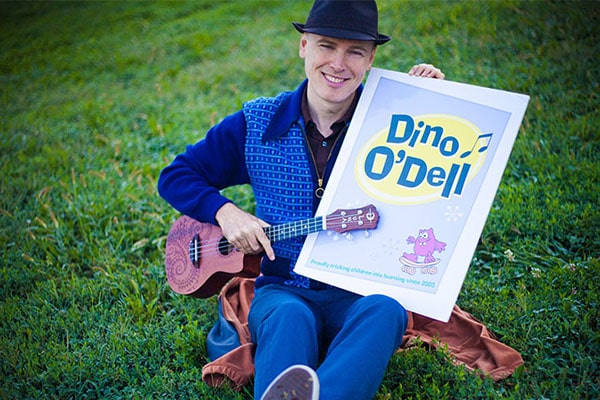 Before 2003, Dino was an elementary music and drama teacher by day and a folk-rock and reggae musician by night. Now in his tenth year as a family entertainer, his live shows and studio recordings reflect his years of experience as both an educator and a performer; Dino is a master at tricking kids into learning.

“We learn best when we are engaged and we are engaged best when the medium is interactive.” says Dino. “And whether it’s a counting song, fill-in-the-blank lyric writing or a sing-a-long, stories and songs tap into our innate desire to comprehend, communicate and connect.”

Dino is the 2014 “Lighton Prize for Teaching Excellence” award winner.

Health
Blast Off to Health
Eat Like a Rabbit, Swim in Peanut Butter and Other Healthy Tricks

Social Studies/Culture
Around the World with Dinosaur O’Dell

Professional Development
Motivation, Interaction and Space Aliens: How to Trick Earthlings into Learning