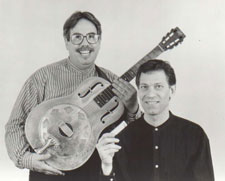 Charlie Pfeffer has sung and played the guitar and mandolin in a variety of traditional American musical styles for 33 years. Charlie has performed with Springboard since 1981. He also performs with the St. Louis based folk group The Flying Mules. Sandy Weltman has been a professional musician and educator for more than 25 years. He is established as one of the leading pioneers on harmonica. Sandy’s musical skills allow him to cover an unusually wide range of musical genres including jazz, blues, bluegrass, Celtic and Middle Eastern. He has been recognized for his musical excellence, was featured on three CDs and appears on dozens of other national recordings.