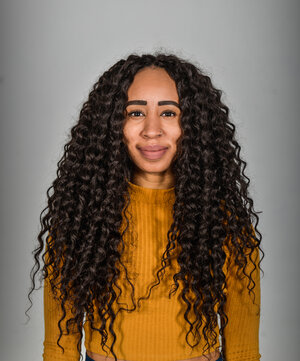 Ashreale McDowell is a native of St. Louis, MO. She discovered her passion for dance at Central Visual and Performing Arts high school and was awarded a pre-professional scholarship to COCA.

Despite the struggles of starting dance at a late age, COCA helped her to grow and develop her technique. She received a Bachelors of Fine Arts degree in Dance from Webster University. It was there at Webster where she was able to deepen her training and discover her artistry as a mover and performer.

She has had the wonderful opportunity to work with artists such as Alicia Graf, Antonio Douthit-Boyd, Kirven Douthit-Boyd, Leonard Cruz, Jimena Paz, Jessica Taylor, Alana Marie Urda, Lynn Bobzin, and David Marchant. As a teenager she performed in AIDA and High School Musical at The Muny. She has performed in The Wiz and The Black Nativity at The Black Rep. Ashreale has studied and performed in Italy. She has had the opportunity to be a teaching artist with Springboard, COCA, Gateway Center of Performing Arts, Ignite Theater, and Consuming Kinetics Dance Company. She was the Mind and Movement Leader at the Biome School from 2016 – 2018 and the Dance Teacher at Brittany Woods Middle School from 2018-2020.